This past Sunday morning will forever be remembered as “Laser Pointer Day” in our middle school environment.

That’s because every student that walked through our doors was handed a laser pointer. 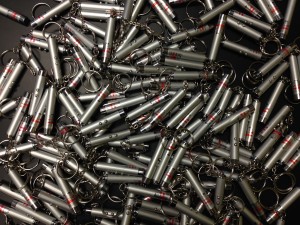 Why would we give hundreds of middle school students laser pointers you might ask? Well, because it was fun!

We actually got the idea from NTS Sumer Camp, which did the same thing at one of their night sessions this year at all their camps. I loved the idea as soon as they told us about it and I knew that we would have to steal it from them (and borrow their laser pointers too – thanks Jayson!). 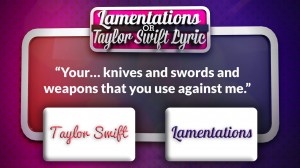 We played “Lamentations or Taylor Swift Lyric” from Download Youth Minstry. It was easy to adapt this game for Laser Pointer Day, all we had to do was add two boxes to the screen – one for Lamentations and one for Taylor Swift. The crowd pointed their lasers at whichever box they thought was the right answer and voilà… we had a laser pointer game.

The laser pointers we used actually had an LED light as well as a laser on them. So, for one of our songs, we turned out all the lights and asked our students to push the LED light button. The effect was really cool – it looked like lightning bugs all across our room. For another song we used a large beach volleyball and told our students to point their lasers at it during the song. It was perfect for a high energy song and gave us another use for the lasers.

Overall, Laser Pointer Day was a huge hit. We love to hand things out at the door because it helps set the tone for the entire morning, and it’s a great way to build excitement and to put visitors at ease.

Have you ever given something away to every student at your door or something similar? Tell us about it!